A privileged witness to history 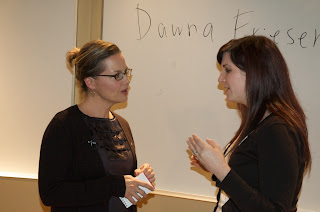 Dawna Friesen (left) talks journalism
with student Emily Baron Cadloff
(John Pura, Red River College)
Journalists are privileged observers of troubling events, an Emmy award winner told students at Red River College on Nov. 20, 2009.
Reporting from the Gaza Strip and Iraq reminded Dawna Friesen, London correspondent for NBC News, just how privileged reporters are. As she was covering stories in those violent areas, citizens would beg her to help them leave, she said.
Friesen, a graduate of the Creative Communications program, was honoured by the college as a distinguished alumna.
Before the alumni dinner, Friesen recounted highlights of her career and dropped some nuggets of advice for current students in the program.
Double-check your work, she said -- especially when you are taking information from unverified sources such as Twitter. Postings on social media from people on the scene provided vital information during recent post-election unrest in Iran, whose government severely restricted reporting and even arrested and tortured journalists.
Friesen's bottom line on her job as an international television journalist? "It's not a glamorous life."
She told a vivid story about getting sick after eating lousy food in one unpleasant corner of the world.
But it's worth it Friesen said.
"You're witnessing history."
Posted by Duncan McMonagle at 3:29 PM No comments: