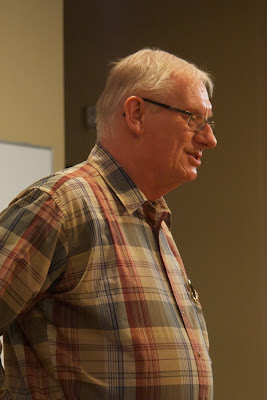 Photo by John Pura, Red River College
Armin Wiebe includes plautdietsch, Low German, in the dialogue of much of his work, including his play The Moonlight Sonata of Beethoven Blatz.
Today he explained his motivation to Creative Communications students at Red River College.
"I like the way that I think I can make the language sing."
Posted by Duncan McMonagle at 3:17 PM No comments:

This week Creative Communications first-year students will attend a play with the funkiest name of the year – The Moonlight Sonata of Beethoven Blatz.

They will talk with the actors and the author, Armin Wiebe, and next week they will blog about the experience. And then their semester will be over.

So what and who are Blatz and Wiebe?

“Mennonites in lust! But not talking about it,” is CBC reviewer Joff Schmidt’s capsule take on the play.

Armin Wiebe (The Arminator, to some of his friends) is a Manitoban who has written four novels.

The setting for three of them, and for this play, is the imaginary Mennonite community of Gutenthal, one mile from the U.S. border, a million miles from reality and one inch from truth.

Wiebe writes in his own blend of, mostly, plautdietsch – Low German – and what he calls “buggered-up English.”

The result is funny on the page, hilarious and touching when spoken. That is the strength of the play.

The genesis of Blatz lies in the story And Besides God Made Poison Ivy, published in Due West (Turnstone Press, 1996).

Now Scirocco Drama has released the play as a book.

Kevin Prokosh of the Winnipeg Free Press recently interviewed the playwright. He also reviewed Blatz very positively, writing in the spirit of the play.

But hold a minute on!

A brummtopp? You have to hear it.
Posted by Duncan McMonagle at 10:06 AM No comments: